Electrically Conductive Adhesives: Are They Right for Your Application? 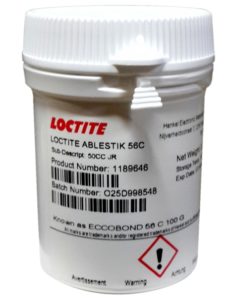 The exponential rise and now nearly universal integration of electronic devices in our daily lives has necessitated the creation of advanced adhesives and coatings. Electrically Conductive Adhesives (ECAs) have worked their way into a number of fields both directly and indirectly related to electronics manufacturing. ECAs are typically composed of an epoxy resin but can also be made of UV cure and silicone adhesives. To overcome the high resistivity of these compounds, the adhesive is loaded with upward of 80 percent conductive materials. These adhesives can be applied in any number of usual ways, from syringe to screen print.

There is an enormous variation in ECAs, and choosing which adhesive is right for your application depends on a number of factors. ECAs vary depending on what conductive particles are used, as well as what adhesive they are suspended in.

Most adhesives can be made into conductors by adding enough conductive filler so the usual considerations about what adhesive will work best should be taken into account. Factors like application method and cure-time, as well as environmental and direct stresses the adhesive joint will be under all need to be considered. One and two-part epoxies are the most commonly used adhesives, but silicones and other UV cure adhesives are all options.

A number of metals or compounds can be used to provide the electrical conductivity in an ECA. Silver is the most common because it has a very low resistance and can be cost efficient compared to other options, such as gold. Copper, gold, nickel, aluminum and graphite are other popular options for ECAs. Certain combinations can offer other advantages – such as silver plated copper or nickel, which are often less expensive but still offer low resistivity. The exact composition of the filler and method of distribution in the adhesives can be tailored to meet the required specifications.

Silver and gold are metals that are commonly used to provide electrical conductivity in an ECA.

The use of ECAs can be broadly split into two categories – conductive uses and shielding uses. ECAs used as a conductive connection often use silver as the filler material, while ECAs used in shielding are most often made with less conductive materials, like graphite. 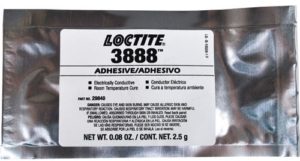 With high-tech glass and plastics also playing an increasingly large part in consumer electronics, adhesives are needed that suit these applications. Nearly every modern cell phone or display device contains a transparent conducting film (TCF) of some kind. Indium Tin Oxides (ITOs) and other TCFs used in LED and OLED displays can be connected with the use of an electrically conductive adhesive to preserve optical transparency where wires or solder wouldn’t be appropriate. ECAs can also be manufactured in the form of a transparent adhesive film that can underlay such TCFs, connecting them to internal electronics.

These delicate components and modern thermoplastics can also be sensitive to high-heat. ECAs are sometimes referred to as “cold solder” because their conductivity offers an alternative to traditional solder connections in applications where the heat involved with soldering is too high. As a solder alternative, ECAs have the advantage of being lead-free when environmental or regulatory concerns are paramount. ECAs also offer options for repairing printed circuit boards (PCBs) where solder is an inconvenient or impossible option.

Finally, ECAs are also efficient heat conductors, and for that reason some ECAs or pastes can be used in heat-dissipation applications. RFID assembly and other flip-chip connections can be achieved with ECAs replacing the traditional solder bumps.

ECAs are also used for their ability to provide a conductive surface in applications that need shielding from electromagnetic interference (EMI) or electrostatic discharge (ESD). Now that high-frequency EMI emitting devices are nearly ubiquitous (as are those that can be interfered with) international and FCC EMI compliance standards need to be considered carefully in the design of any product. When an ECA is applied as a coating, or to adhere pieces of electronics shielding, it acts as a Faraday cage, distributing charge around the coated object, rather than through it. This type of shielding can provide protection even at high frequency.

ESD can also be dangerous in environments with sensitive electronics or volatile chemicals. ECA coated or backed flooring can provide a way to safely discharge and prevent the buildup of static electricity and comply with ANSI/ESD S20.20.

The types of ECA are as diverse as their potential uses. ECAs have been developed for nearly every application and finding the right one depends on the specific situation. While ECAs can serve as a solder replacement in general use – they can also be formulated for other specialty situations. In places where corrosion is a concern, non-corrosive filler material like graphite can be used. For applications where magnetic interference is a problem, ECAs can be mixed with non-magnetic materials. Other specific formulations can be suited for when ECAs are applied as a coating in electrostatic discharge or EMI shielding. Determining exactly what your needs are in terms of both physical connection and electrical connection will allow you to find an ECA that’s tailored to meet your needs precisely.

Gluespec helps engineers to discover adhesives and other materials for their industrial applications.